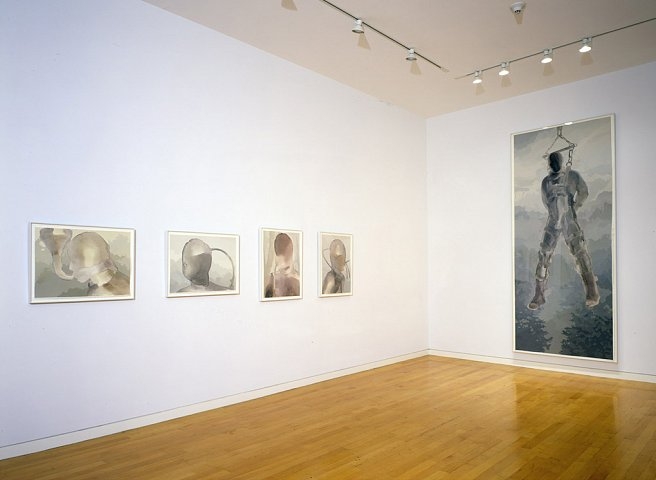 With their subtly modulated tones and deep subject matter, Monica Majoli’s watercolors were odd ducks in the 2006 Whitney Biennial, lost in the screaming banter of brat videos, poseur attitudes and abject tchotchkes. Known for obsessively meticulous oil paintings depicting private sexual acts and wrenching self-portraits, Majoli has been a quiet force in Los Angeles for over 10 years, with each new work eagerly anticipated by a small cult audience. This exhibition, only her third solo show since getting an MFA at UCLA in 1992, is somewhat of an event, presenting her contemplative mastery of a new medium.

Majoli uses watercolor and gouache to paint solitary, rubber encased male figures involved in sexual fetish acts of sensory deprivation. Focusing on the figures and their accoutrement in close-up, she avoids the lurid associations of the fetish-world, presenting her subjects’ disembodied, isolated states as a kind of symbolist reverie, not unlike those conjured by Redon and Moreau. The figures are depicted outdoors in woodsy surroundings without signs of human habitation. Majoli uses atmospheric gray, violet and blue hues throughout, employing opaque gouache to depict the landscape backgrounds, and transparent watercolor to depict the figures. The gouache sections are painted as segmented contours, somewhat in the style of some early Californian landscapes or the canvases of Augustus Vincent Tack. For the hooded figures, watercolor is used in subtle, viscous layers with thinly watered-down sections emulating the effects of light on shiny PVC.

The sensitive, responsive quality of watercolor seems the perfect medium to convey the
interior states of the male fetishists. The watery tones of the featureless heads seem to be reflections of the dreamy, out-of-body experience that the fetishists desire. The tubes and chains that enable sensory deprivation seem extensions of their skins, appearing like alien appendages or antennae. In the four close-up “Heads” (2004-05), the rubber masks and body suits provide an expansive area for Majoli’s sensuous watercolor hues and set the meditative tone of her project. Two other large drawings show full figures suspended by hoists over expansive forests. In Hanging Rubberman #3 (2004), a horizontal figure totally encased in rubber and attached by chains to a sturdy hoist is presented from a low angle so that he seems suspended over a far-off landscape, isolated like some aberrant astronaut frozen in space. The vertically suspended Hanging Rubberman #1 (2006) is hoisted by a torso-apparatus so that he dangles above a lushly dappled forest. His arms locked behind him and his legs held firmly apart, he seems to be standing still in the air. Mingling Eros and Thanatos, Majoli’s melancholic ruminations portray a zone of sacrificial loneliness where identity and personality are subsumed by internal psychological desires even more powerful than nature.