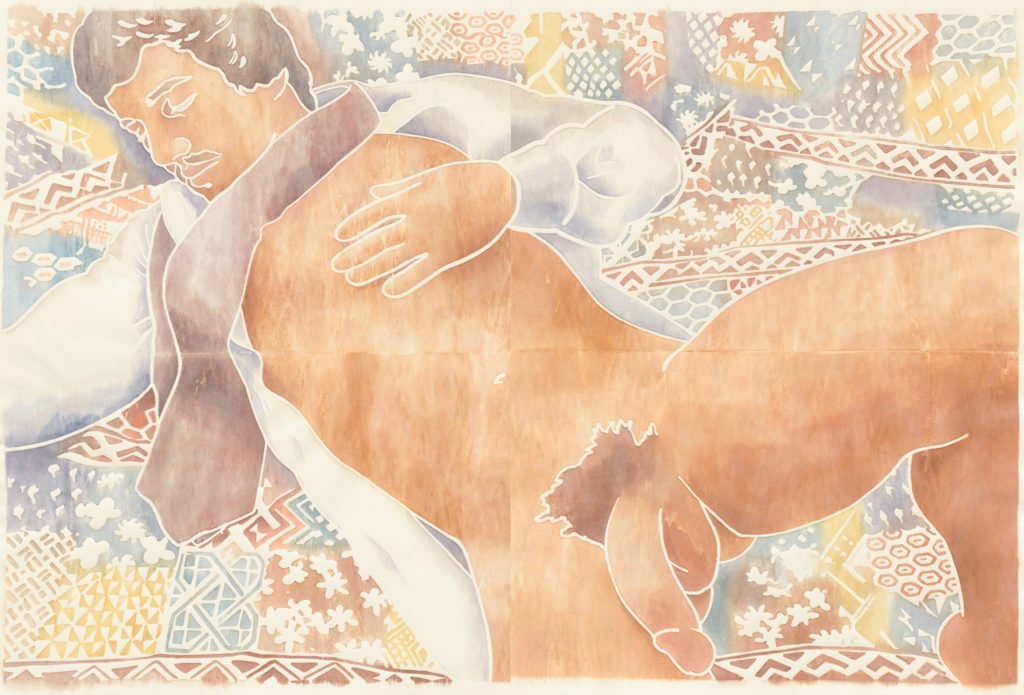 Six naked men – Armando, Pedro, Roger, Carl, Ryan and Ted – appear in ‘blueboys’, Monica Majoli’s new suite of large paintings at Galerie Buchholz in New York. Each work is derived from the early centrefolds of Blueboy (1974–2007), a gay lifestyle and entertainment magazine Andy Warhol once called one of his favourites. It’s the same magazine Cyndi Lauper flips to, to find men ‘in tight blue jeans’ in her thinly veiled ode to masturbation, ‘She Bop’ (1984). Majoli appropriates her brawny beauties from the earliest issues, before the gay imaginary was jolted, with the AIDS crisis, by the rhetoric of mistake, contamination and filth. In Blueboy (Roger) (2018), the titular subject – a well-known stud from early gay pornographic cinema – still has his work shirt on, and reclines on a quilted divan; Blueboy (Carl) (2019), the blond, is unzipped and pressed up against bathroom tile; Blueboy (Ted) (2019) holds himself up on his elbows near a bedroom window, his perineum is perched but his gaze is vacant, a bit oneiric: Is he waiting for something to begin, or to end? 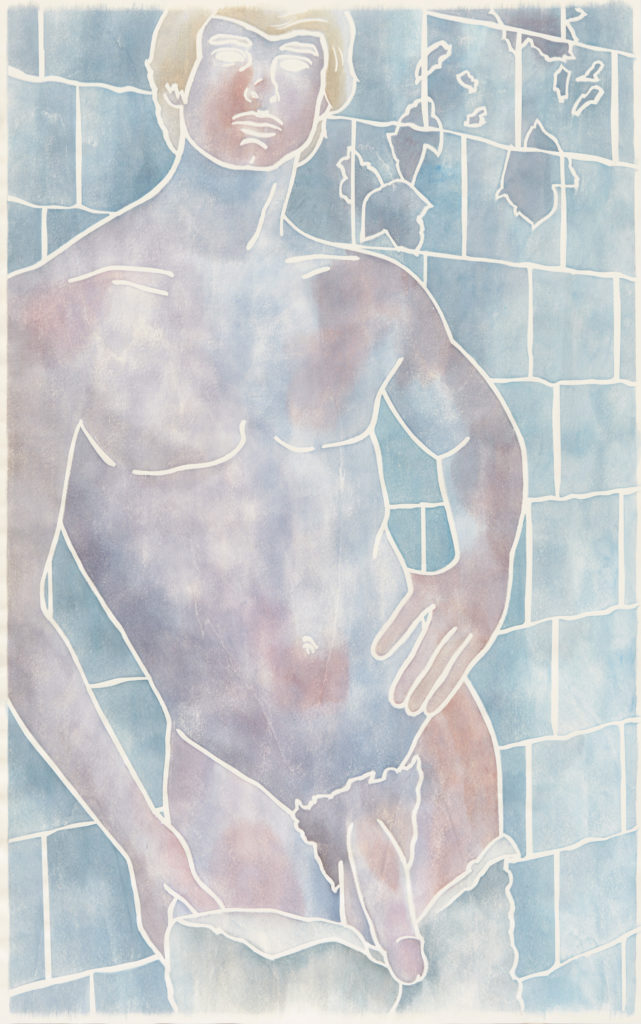 For ‘blueboys’, Majoli used a woodcut process inspired by mokuhanga, a Japanese woodblock printing technique. The method appears deceptively simple, requiring only a block of wood, a cutting knife and a large spoon, but it is a rigorously analogue procedure. After chiselling the outline of her centrefold man into wood, Majoli applied paint to each section of the block. The image was then transferred by slowly rubbing the soaked wood onto the paper’s surface using the back of a spoon. On paper, the men’s flesh is supple, responsive to the wood’s grain – as in Blueboy (Ted), where a knot has been impressed onto Ted’s shapely buttocks.

The paper catches impressions of the men through a series of material displacements (from photograph to wood, and then from wood to paper), which distance us from Majoli’s source material so as to also consider their vulnerabilities, their softness and a past textured with both fantasy and death. Gone is the photographic realness, replaced with something far ghostlier. In this sense, Majoli’s paintings resemble negatives of photographs rather than photographs themselves. The spectral figures are painted in, but the outline of their bodies is left unpainted, emphasizing the fact that these men’s bodies – in history and in Majoli’s paintings – were once devastatingly positive.

Majoli’s paintings re-present what her historical subjects couldn’t have known: that the community for which they became symbols of post-Stonewall sexuality would soon be marked with a valedictory contingency – annihilation. I look at the grain discolouring Ted’s ass and see, for example, the possibility of a legion. As much as ‘blueboys’ testifies to gay liberation’s halcyon days, the series also implies, with its ethereal figures, the terror that would create an existential crisis for gay life – and make of so many men so many ghosts.

Shiv Kotecha is the author of The Switch (Wonder, 2018) and EXTRIGUE (Make Now, 2015). He is a contributing editor of frieze and lives in New York.